One finding and two surprises

The gastric polyp seen in the video was discovered in a 65-year-old man who presented with a microcytic anaemia.

What is your Endoscopic diagnosis?

Answer to case question 1 and discussion

This is a somewhat peculiar looking gastric lesion that is composed of a pale part and more erythematous, indurated part. The lesion is clearly malignant and has an ominous-looking nodularity in the centre and a more infiltrative edge.

The photographs below show the histological findings for the lesion and reveal something unexpected. 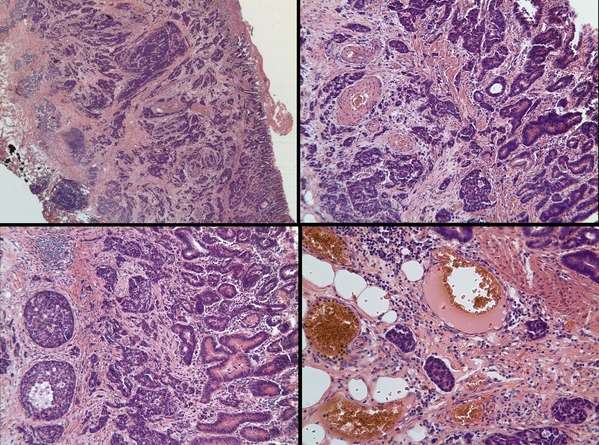 What is the unexpected finding revealed by the histology?

a.     This cancer is limited to the mucosa

b.     There is lymphovascular infiltration

c.     This is likely to be a metastatic deposit

e.     The cancer appears to have arisen from within a gastrointestinal stromal tumour (GIST)

Answer to case question 2 and discussion

This kind of neoplasm is aggressive and usually has a poor prognosis, presumably because both components are malignant.2 Typically, the neuroendocrine portion of the neoplasm is grade 3 with >20 mitoses per 10 high-powered fields (HPF) and/or a Ki-67 proliferative index of >20%.  The only hope of cure is offered by gastrectomy. In patients who have advanced disease platinum-based chemotherapy, such as a combination of cisplatin and etoposide, has been recommended.