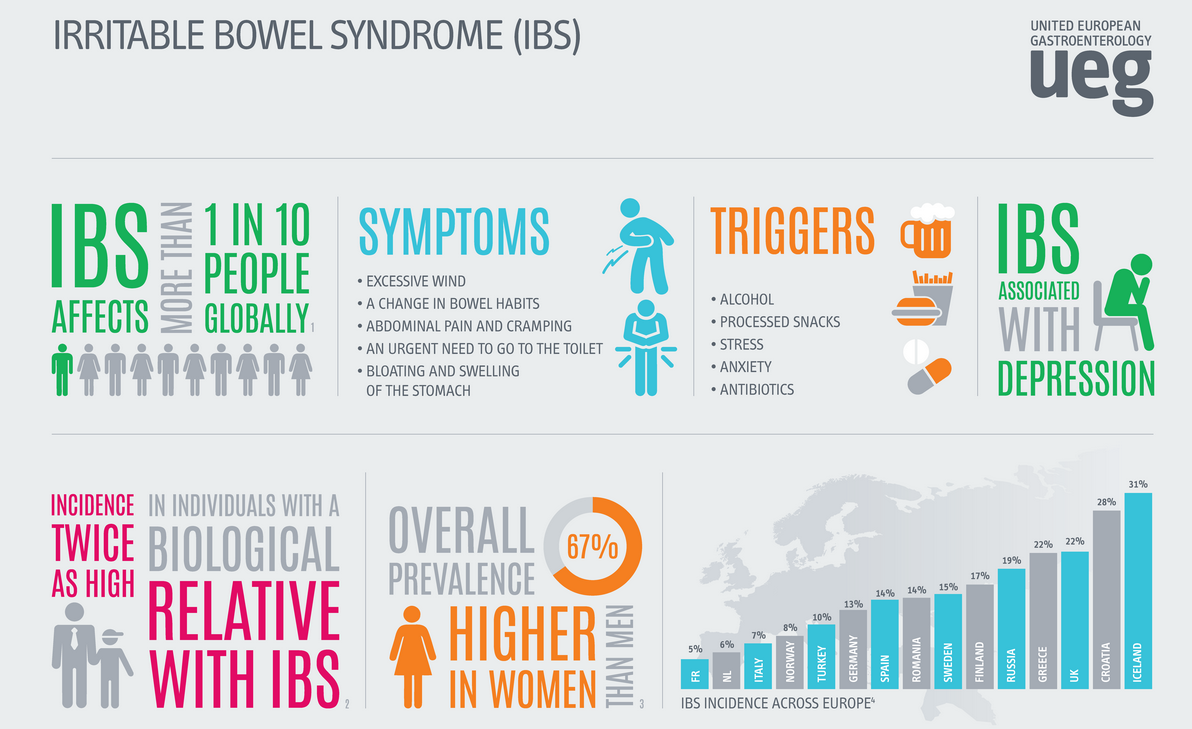 A low-FODMAP diet is now an established treatment for people with irritable bowel syndrome (IBS), but the diet is controversial and challenging to follow, and not all IBS sufferers have a positive response to the intervention. Today, scientists at UEG Week have announced that bacterial profiles in the faeces differ between people who do and do not respond to a low-FODMAP diet, allowing doctors to predict who might benefit most from using the diet.

Presenting their findings for the first time at the opening session of UEG Week 2016, Dr Sean Bennet from the University of Gothenburg in Sweden, told delegates that, in the right people, a low-FODMAP diet can be highly effective, but identifying those individuals is currently impossible. “A low-FODMAP diet has been shown in a recent clinical trial to significantly reduce the symptoms of IBS in around half of the people who tried it,” he said. “Unfortunately, this is a very demanding diet that requires the exclusion of entire food groups, so we have been looking at ways to predict who will gain the greatest benefit from trying it.”

Being able to predict if a patient is unlikely to respond to a low-FODMAP diet means that other therapies could be discussed earlier, and these patients could be spared a demanding diet that might have no effect, or even worsen, their symptoms.

What is the low-FODMAP diet?

Dietary interventions are considered to be first-line treatments for patients with IBS. A ‘traditional’ IBS diet focusses on optimizing eating patterns and reducing the intake of specific foodstuffs that are known to worsen symptoms in some people. The low-FODMAP (Fermentable Oligosaccharides, Disaccharides, Monosaccharides And Polyols) diet requires restriction of certain carbohydrates, including foods such as wheat, barley, onion and legumes, foods rich in free fructose (including many fruits), and artificially sweetened products.

The study* presented today by Dr Bennet and colleagues involved an analysis of data from 61 patients with moderately severe or severe IBS symptoms who took part in a previous clinical trial. In that trial, patients followed a ‘traditional’ or low-FODMAP diet for 4 weeks, with faecal samples collected before and after the dietary interventions. Bacterial profiling of the samples found differences in the impact of each diet on the gut bacteria composition and also revealed that the faecal bacterial profiles differed between patients who responded to the low-FODMAP diet and those who did not.

“Patients who did not respond to the low-FODMAP diet were found to have more abnormalities in their gut bacterial profiles before they started the diet than those who responded to the diet,” said Dr Bennet. “This raises the possibility that faecal bacterial profiling could be undertaken before dietary interventions are considered.

“Being able to predict if a patient is unlikely to respond to a low-FODMAP diet means that other therapies could be discussed earlier, and these patients could be spared a demanding diet that might have no effect, or even worsen, their symptoms.”

Dr Bennet is from the Department of Internal Medicine at the University of Gothenburg, Sweden. His study on gut microbial profiles and low-FODMAP diets has been selected as one of the top five abstracts submitted to UEG Week Vienna 2016: https://www.ueg.eu/awards-grants/ueg-week-awards/top-abstract-prize/

Professor Törnblom is a member of the UEG Public Affairs Committee and is an Associate Professor at the Institute of Medicine, Sahlgrenska Academy, University of Gothenburg, Sweden.