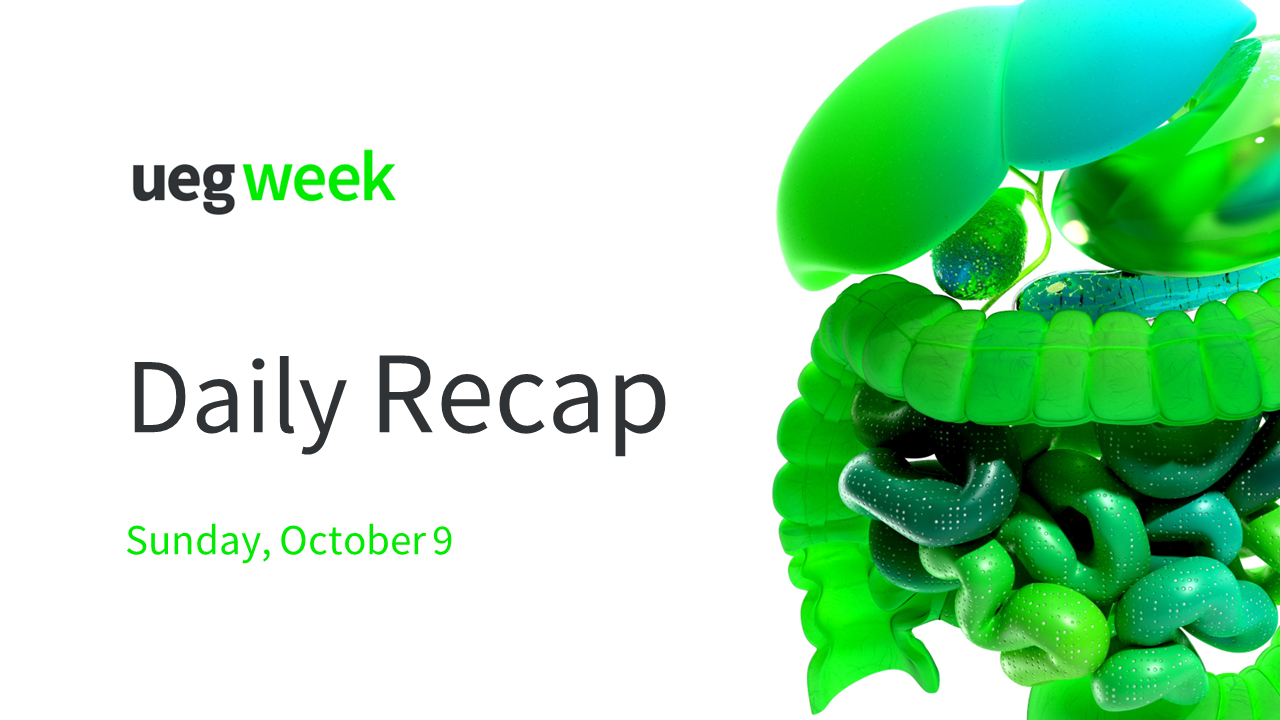 We're back onsite for the Opening Session!

Delegates were warmly welcomed to UEG Week at the Opening Session Part I (13:30-14:30) this afternoon.

UEG President, Helena Cortez-Pinto, emphasised how pleased she was to have UEG Week back as an onsite event. “I want to welcome all of you and it is an enormous pleasure and honour to open UEG Week 2022”, she explained. “We have lots to celebrate – 30 years of UEG Week and over 12,000 myUEG Associates in our myUEG Community, which is all very positive. I’d like to say thank you to our industry partners, who are very important for this congress and who have put on a fantastic exhibition. Here’s to a successful and fruitful UEG Week 2022!”

Helena Cortez-Pinto was joined onstage by Julia Mayerle, Chair of the UEG Scientific Committee. “I’m sure everyone agrees that it’s great to be onsite and in Vienna again”, she said. “It’s a pleasure to watch colleagues and friends discuss hot topics in GI medicine and see such enjoyment.”

Julia Mayerle also discussed how learnings from the pandemic have helped to shape the congress programme. “We noticed how increased discussion time is beneficial to the Scientific Programme, and we wanted to keep that. This makes for livelier talks, where delegates can ask more questions and get more information.”

“It’s also nice to see that colleagues at home – no matter where they are in the world – can engage with our world-class faculty onsite”, she added.

This was followed by an insightful presentation from Roland Rad on target discovery for gastrointestinal diseases, the first of the UEG Week Top Abstract presentations and the awarding of the UEG Research Prize to Neil Henderson. 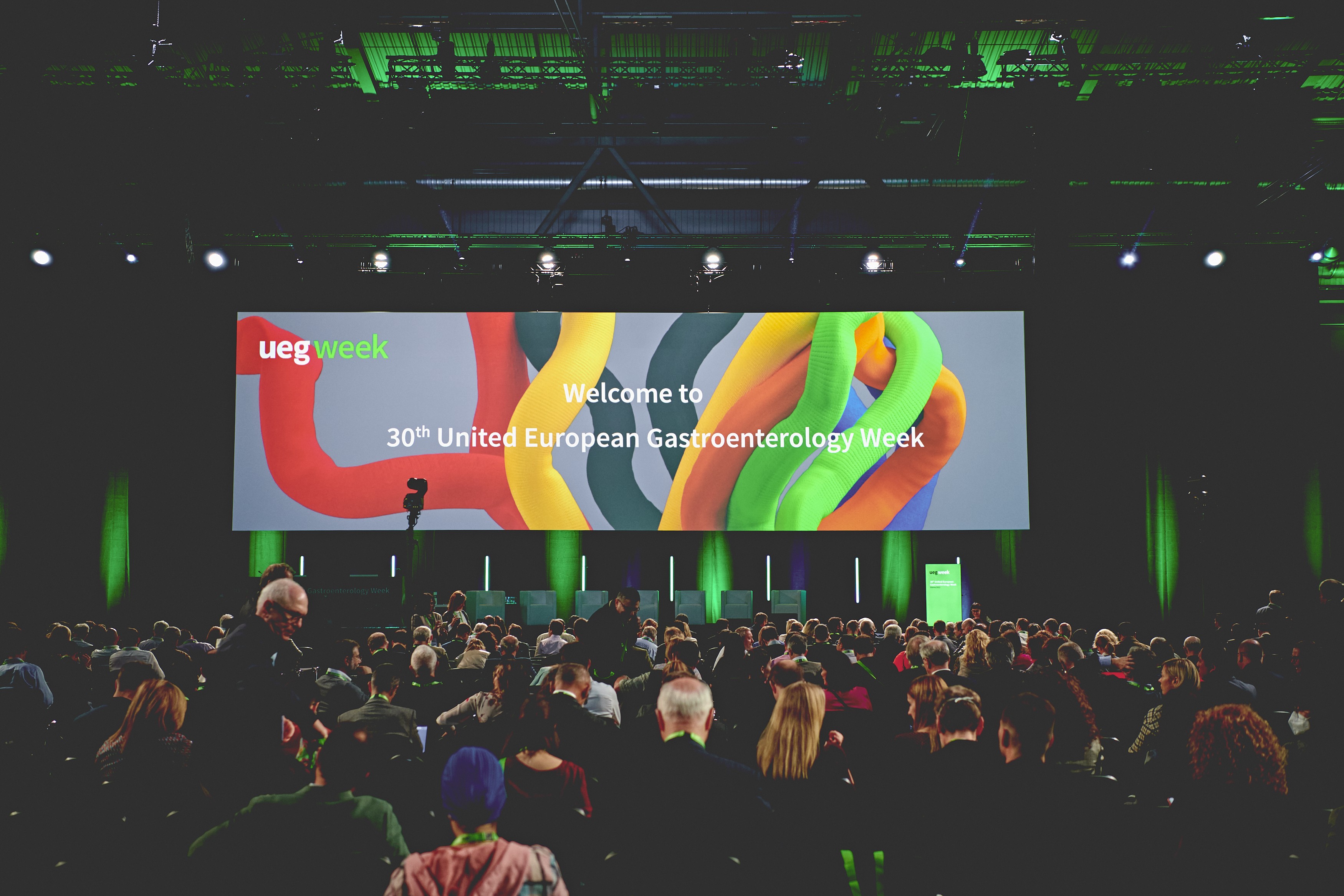 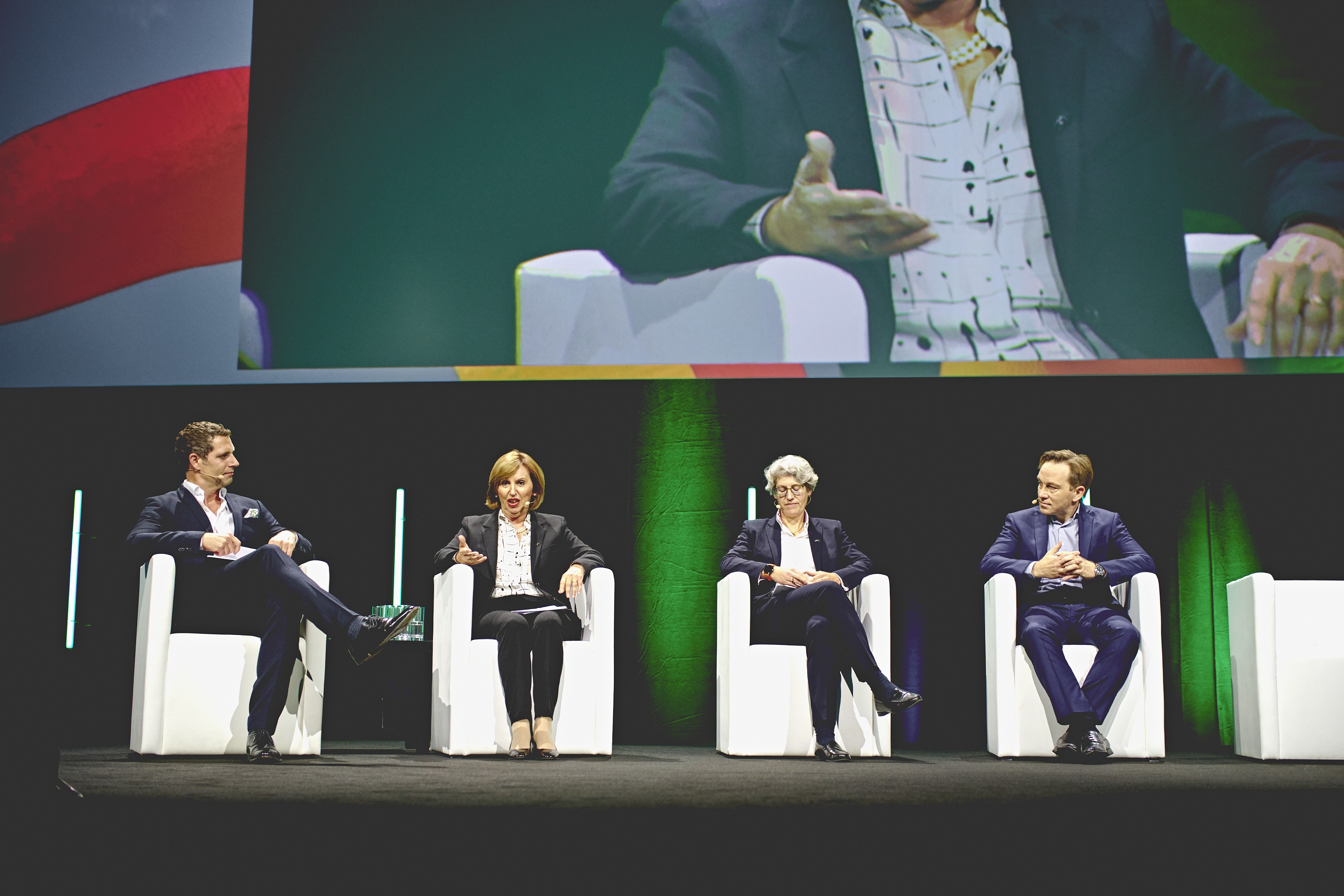 The results from a 52-week, Phase 3 U-ACHIEVE Maintenance study were presented during today’s Opening Session Part I. Presented by Severine Vermeire, the study was selected as one of the Top Abstracts at this year’s congress.

U-ACHIEVE Maintenance was a multicentre, randomised, double-blind, placebo-controlled study to evaluate the efficacy and safety of maintenance upadacitinib in patients with ulcerative colitis. Eligible patients were those who achieved a clinical response, as per adapted Mayo score, with upadacitinib 45 mg once daily (QD) following 8 weeks of induction therapy in U‑ACHIEVE Induction or U-ACCOMPLISH. 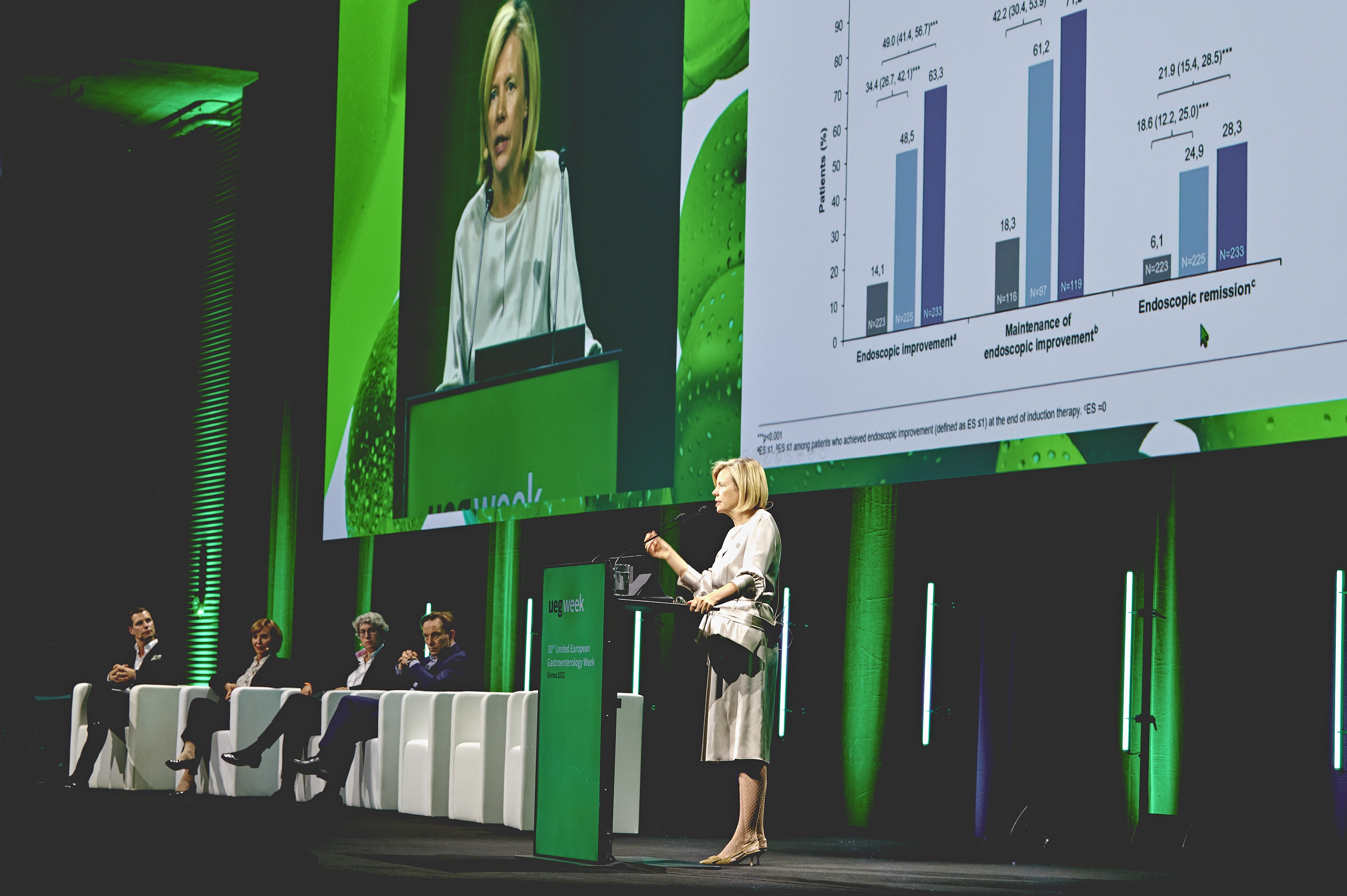 During the Opening Session Part I, Neil Henderson was awarded the UEG Research Prize for his exceptional project ‘Using integrated single cell genomics and spatial transcriptomics approaches to identify the key therapeutic targets driving the progression of human NASH’.

Neil Henderson’s exciting and novel vision for his award-winning proposal focuses on unravelling the complexity of how the multiple cell lineages inhabiting the human NASH fibrotic niche interact to regulate and drive the progression of human liver fibrosis.

Over the last twenty years, Neil Henderson has used basic science combined with translational research approaches to investigate the cellular and molecular mechanisms driving liver fibrosis. His previous work has been recognised by the award of prestigious prizes and invited lectures such as the UEG Rising Star Award (2014) and the Hans Popper Basic Science State-of-the-Art Lecture, American Association for the Study of Liver Disease (2021).

“I am both deeply honoured and delighted to receive the UEG Research Prize 2022”, he added. 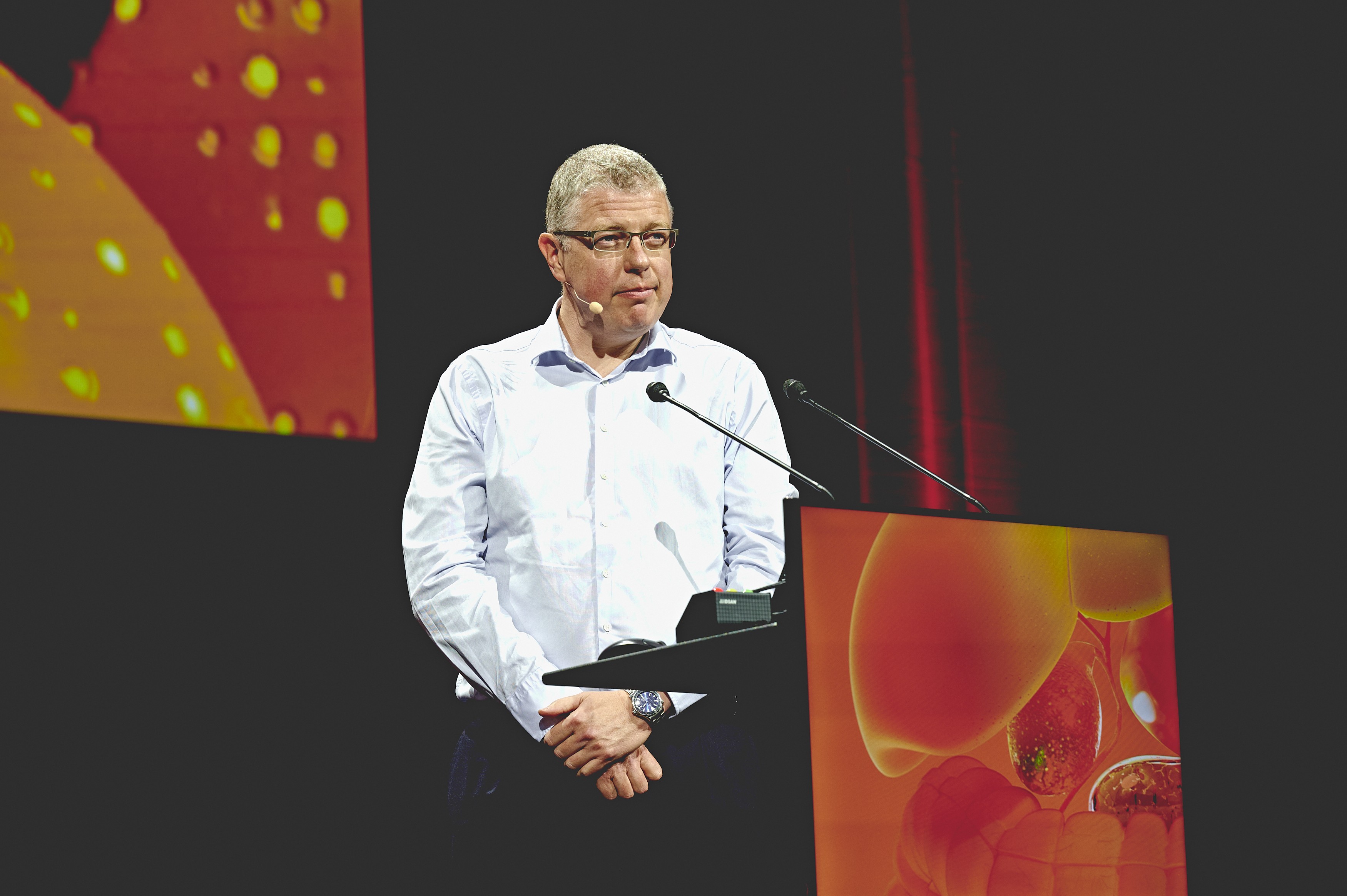 The Predicting Response to Immunotherapy for Melanoma with gut Microbiome and Metabolomics (PRIMM) study explored the dynamics of the gut microbiome during ICB treatment.

Investigators profiled the gut microbiome of advanced melanoma patients (n=175) undergoing ICB at cancer centres in the UK and the Netherlands. Shotgun metagenomic sequencing was performed on stool samples to compare microbiome before and during treatment and to explore the correlation with treatment success, measured in terms of 12-month progression-free survival. Investigators used a regression model with higher-order interactions to estimate the changes in bacterial species and metabolic pathways, while also disentangling the longitudinal effect of these factors. The effects of treatment characteristics, including any differences between patients who responded to single (programmed cell death 1 [PD-1]) or combination (PD-1 and cytotoxic T-lymphocyte-associated protein 4 [CTLA-4]) ICB, in patients with prior exposure to antibiotics or proton pump inhibitors (PPIs), or in patients who experienced immune-related adverse events such as colitis were also analysed.

Through longitudinal gut microbiome profiling of 175 advanced cancer patients, the study derived novel insights into pharmacomicrobiomic interactions that are relevant to the increased success of ICB. While species that continuously associate with response represent potential targets for FMT, species that exhibit a significant difference between responders and nonresponders after the last treatment visit may also hold diagnostic value. 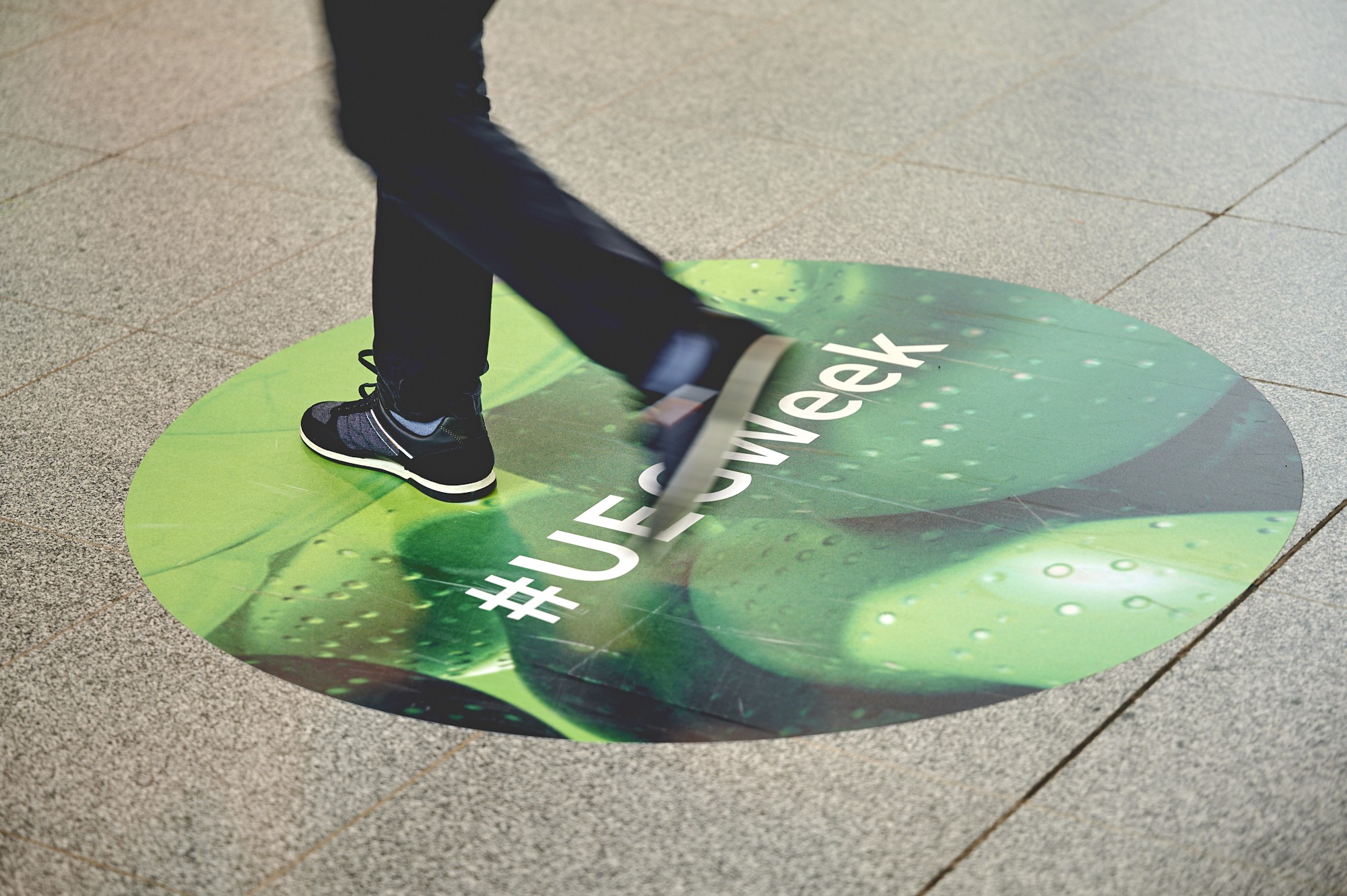 Today’s Opening Session Part II saw Michael P. Manns receive the Lifetime Achievement Award for his outstanding contributions to the field of digestive health and his major impact to the myUEG Community.

“I feel very honoured to receive the UEG Lifetime Achievement Award”, commented Michael Manns. “Digestive health is a field that is growing, revealing numerous new opportunities and UEG offers an ideal umbrella for digestive health in Europe with all its national societies and interdisciplinary subspecialty organisations.”

Michael Manns served as a member of the UEG Scientific Committee and was elected UEG President (2016-2017). It was in this role that he enhanced UEG’s reputation as a leading voice in global gastroenterology and hepatology and, ultimately, the European umbrella organisation for digestive health.

“There are still many unanswered questions in digestive health”, Michael Manns added. “We now look to the next generation to further develop this exciting but complex discipline. With both public interest and an increasing political influence in Europe, digestive health is becoming even more important in the field of medicine. Particular attention must now be paid to digestive cancers, in particular to diagnose and treat early cancers, infectious diseases of the gastrointestinal tract and liver, chronic inflammatory diseases of unknown cause, and interventional endoscopy, all in close collaboration with visceral surgery.” 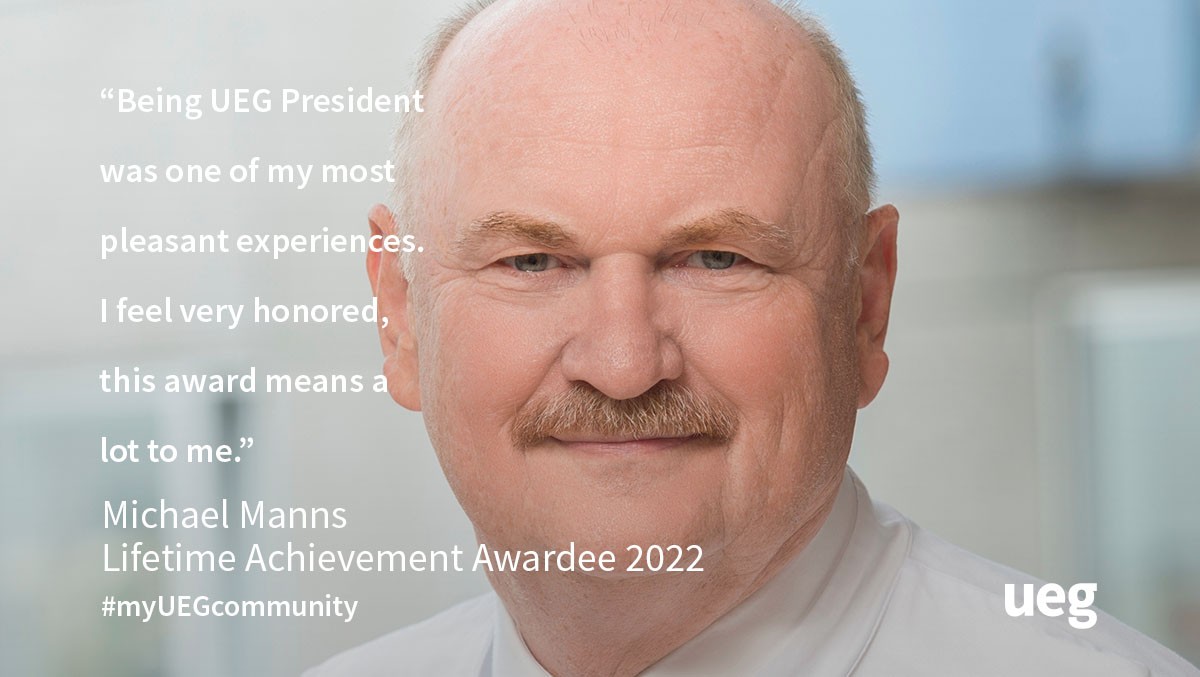 At this year’s congress we continue our highly successful and popular 'Mistakes In…' sessions at UEG Week. Delegates can tap into the experience of experts and learn what to avoid in research, diagnosis and treatment of digestive diseases.

In today’s programme, leading experts Charles Murray and Matt Rutter discussed nutrition and surveillance in IBD as part of the ‘Mistakes In…: Luminal IBD and endoscopy’ session.

One of the UEG Week press topics was presented today and demonstrated that eating a Mediterranean diet is associated with improved immunotherapy response rates and progression-free survival in advanced melanoma patients.

The multi-centre study from the UK and the Netherlands recorded the dietary intake of 91 patients with advanced melanoma who were treated with Immune Checkpoint Inhibitor drugs. As well as having a significant association with overall response rate, a Mediterranean diet was significantly associated with progression-free survival at 12 months.

Laura Bolte, who presented the study, commented, “ICI has helped to revolutionise the treatment of different types of advanced cancers. Our study underlines the importance of dietary assessment in cancer patients starting ICI treatment and supports a role for dietary strategies to improve patient outcomes and survival.”

The authors anticipate that the diet can play an important role in the success of immunotherapy and trials are being expanded to investigate outcomes for different tumour types, including digestive cancers. The study also found that eating wholegrains and legumes reduced the likelihood of developing drug induced immune-related side effects, such as colitis. In contrast, red and processed meat was associated with a higher probability of immune-related side effects.

“The relationship of ICI response with diet and the gut microbiome opens a promising and exciting future to enhance treatment responses”, added Laura Bolte. “Clinical trials investigating the effect of a high fibre diet, ketogenic diet and supplementation of omega-3 are underway. Since ICI therapy is being expanded to various tumour types, including digestive cancers, these studies could unlock treatment benefits for a large group of cancer patients in the future.”

Start each day by tuning into ‘Good Morning UEG Week’ (09:00-09:30 CEST), or watch the ‘UEG Week: Digging deeper’ sessions for a round-up of congress programme highlights.

Each year, UEG also acknowledges the most promising emerging scientists with the Rising Stars Awards. Join us in the Live TV Studio (10:30-11:00 CEST, 10 October and 10:30-11:00 CEST, 11 October) and hear the success stories of those who were previously awarded with the accolade, including current UEG President, Helena Cortez-Pinto, and UEG Journal Editor-in-Chief, Joost PH Drenth!

That's all for today's recap! Tune in tomorrow for further bitesized highlights from the scientific and wider congress programme. 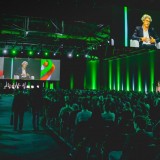 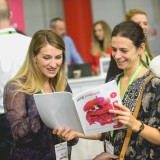 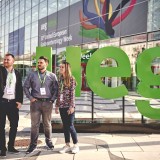 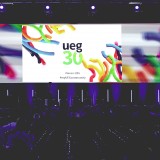