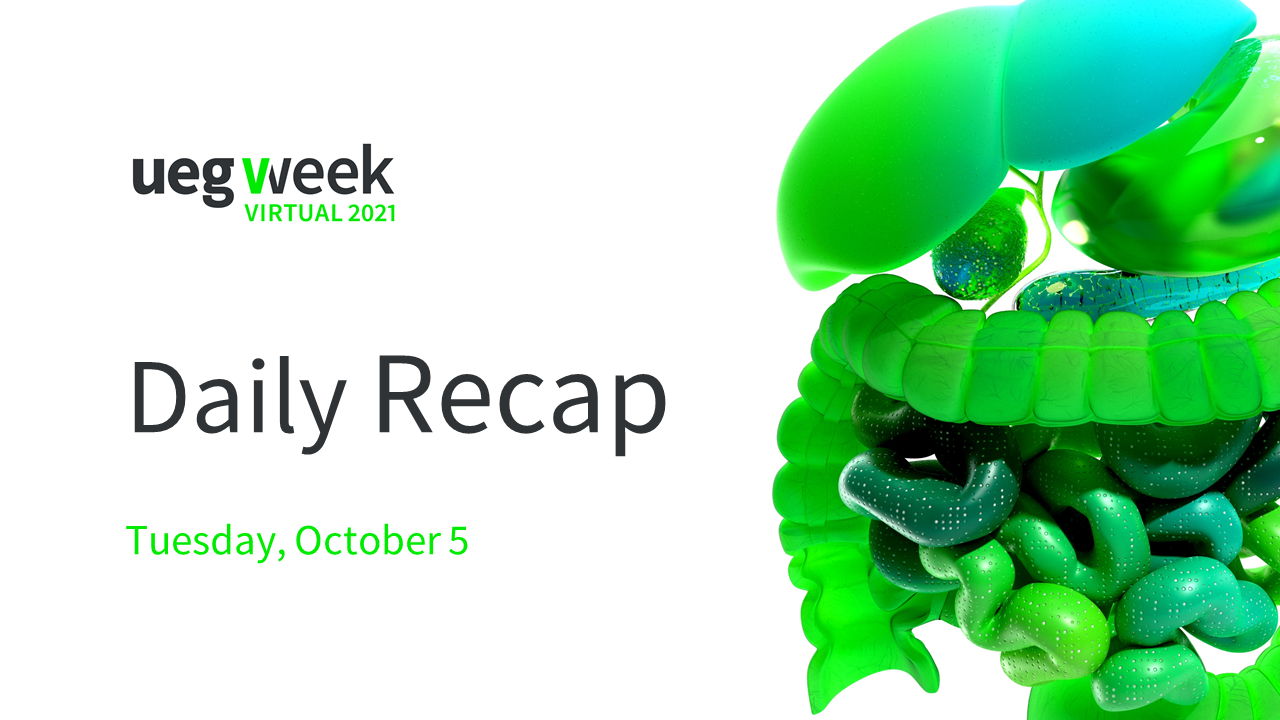 The third and final day of UEG Week Virtual 2021

Today we saw the final day of UEG Week Virtual 2021, with plenty of abstract-based sessions and breaking science. Live endoscopy demonstrations from leading surgeons also featured, where exciting procedures were streamed in real time from Prague.

Scroll through our final recap to digest the action.

One of the first sessions of the day saw an edition of the popular ‘Mistakes in…’ initiative, where participants were invited to learn what to avoid in researching, diagnosing and treating various digestive diseases. Hosted by Charles Murray, three ten-minute presentations were given, covering abnormal live function tests (by Joost P.H. Drenth), liver transplantation (Patrizia Burra) and cystic legions in the pancreas (Juan Enrique Dominguez-Munoz).

Once these three leading experts had given their presentations, the floor opened for debate and discussion on how to achieve best practice and avoid mistakes in each area. The session is available on-demand, as well as the two other ‘Mistakes in…’ sessions from the opening two days of the congress.

One of the most eagerly anticipated sessions of the day looked at the latest clinical trials in IBD, where five breaking pieces of research in the field were presented. The first presentation, presented by Iris Dotan, was selected as a Best Abstract at the congress, confirming that oral filgotinib (200mg/day) is effective in biologic-naïve patients and as an early-line treatment for ulcerative colitis (UC) patients.

SELECTION was a randomised, double-blind, placebo-controlled study including two induction studies (one in biologic-naïve and one in biologic-experienced patients), and one maintenance study. Patients were randomised to receive oral filgotinib 100 mg, 200 mg, or placebo, once daily for 11 weeks. Patients in clinical remission or with an MCS response at Week 10 were re-randomised to continue their induction regimen or to placebo from Weeks 11 to 58.

The investigators concluded that, based on the results of the induction studies, filgotinib 200 mg/day is most effective in biologic-naïve patients and those who switch after failure of only one biologic or MOA.

The second presentation of the session also received a Best Abstract Award. Here, James Lindsay reported on a multicentre, randomised controlled study that investigated low-intensity autologous stem cell transplantation (HSCT) in treatment-refractory Crohn’s disease has reported meaningful reductions in endoscopic disease activity, but the study was halted early due to safety concerns. The study had a target enrolment of 99 CD patients, with 23 patients randomised prior to study cessation.

According to Lindsay and his team, although HSCT using a reduced intensity regimen led to regression of all endoscopic ulceration in some patients, the significant adverse event profile observed in this study preclude its future use in clinical practice. Work is ongoing to try and determine the mechanisms underlying these findings. 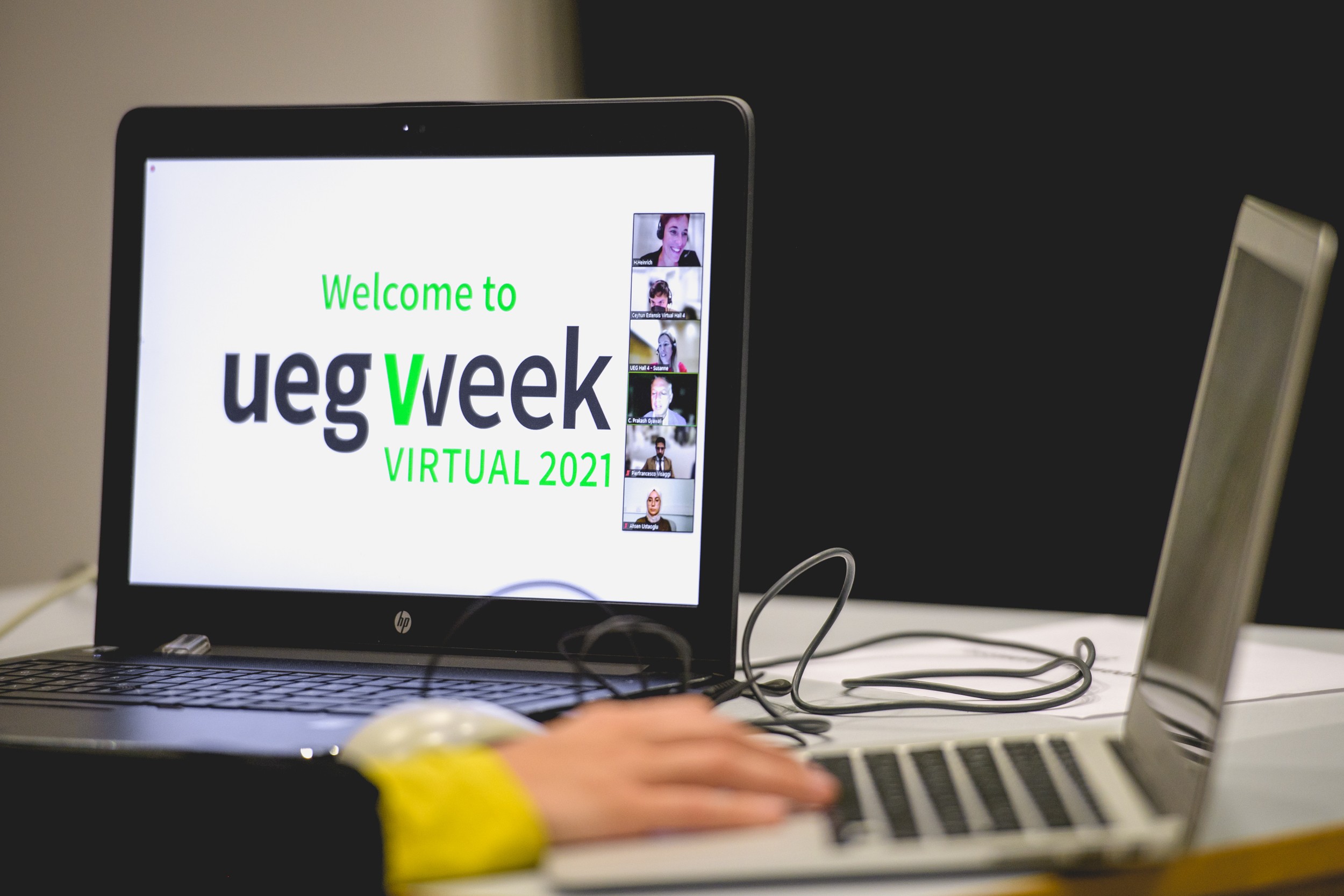 Oesophageal adenocarcinoma cases have tripled in under 50s over the past 30 years, a new study presented today found.

Experts believe that the rise in cases of oesophageal adenocarcinoma reflect changes in lifestyle-related risk factors for the disease, with increases in unhealthy habits including smoking, poor diet and reduced physical exercise.

Ali Al-Kaabi, from Radboud University Medical Centre in Nijmegen, Netherlands, and lead author of the study, explained, “We know the disease is associated with Barrett’s Oesophagus, which is a premalignant condition in the lower end of the oesophagus. Gastro-oesophageal reflux (acid reflux), obesity and smoking are also important risk factors for oesophageal adenocarcinoma. We also know that rates of these risk factors have all increased in young adults over the past thirty years.”

Although patients under the age of 50 were more likely to be diagnosed at an incurable stage compared to those aged 50-74 and over 74 years (47%, 40% and 29% respectively), younger patients were more likely to undergo multimodality treatments and relative survival for the younger age group rose accordingly in comparison to older patients.

Live endoscopy in the Demo Hall

A huge part of the educational programme at UEG Week is learning through watching leading experts perform surgical techniques. This way of learning is key and international experts today demonstrated cutting-edge techniques alongside basic procedures in the Live Demo Hall.

Today’s focus was on endoscopy, with four different sessions throughout the day performing live endoscopies which were webcasted in real time from Prague. A video case session followed, featuring seven presentations that showed examples of new, unexpected, and exceptional endoscopic procedures.

All sessions are available on demand, as well as Sunday and Monday’s Live Demo Hall sessions which focused on a variety of surgical cases and ultrasound.

A large, randomised study has led a team of researchers from the Netherlands to recommend single-dose antibiotic prophylaxis for all patients having emergency cholecystectomy for mild or moderate acute calculous cholecystitis. The non-inferiority study (PEANUTS II), involving six large teaching hospitals in the Netherlands, randomised 457 patients with mild or moderate acute calculous cholecystitis (mean age 58 years; 51% women) to receive either a single dose of intravenous (IV) cefazoline 2000 mg before incision (n=226) or no antibiotic prophylaxis (n=231), with the primary endpoint being a composite of all postoperative infectious complications (surgical site or distant infections) occurring in the first 30 days post-surgery. Secondary endpoints included individual components of the primary endpoint, other complications, and length of hospital stay. All endpoints were analysed based on the ITT principle, with a non-inferiority margin of 10%. 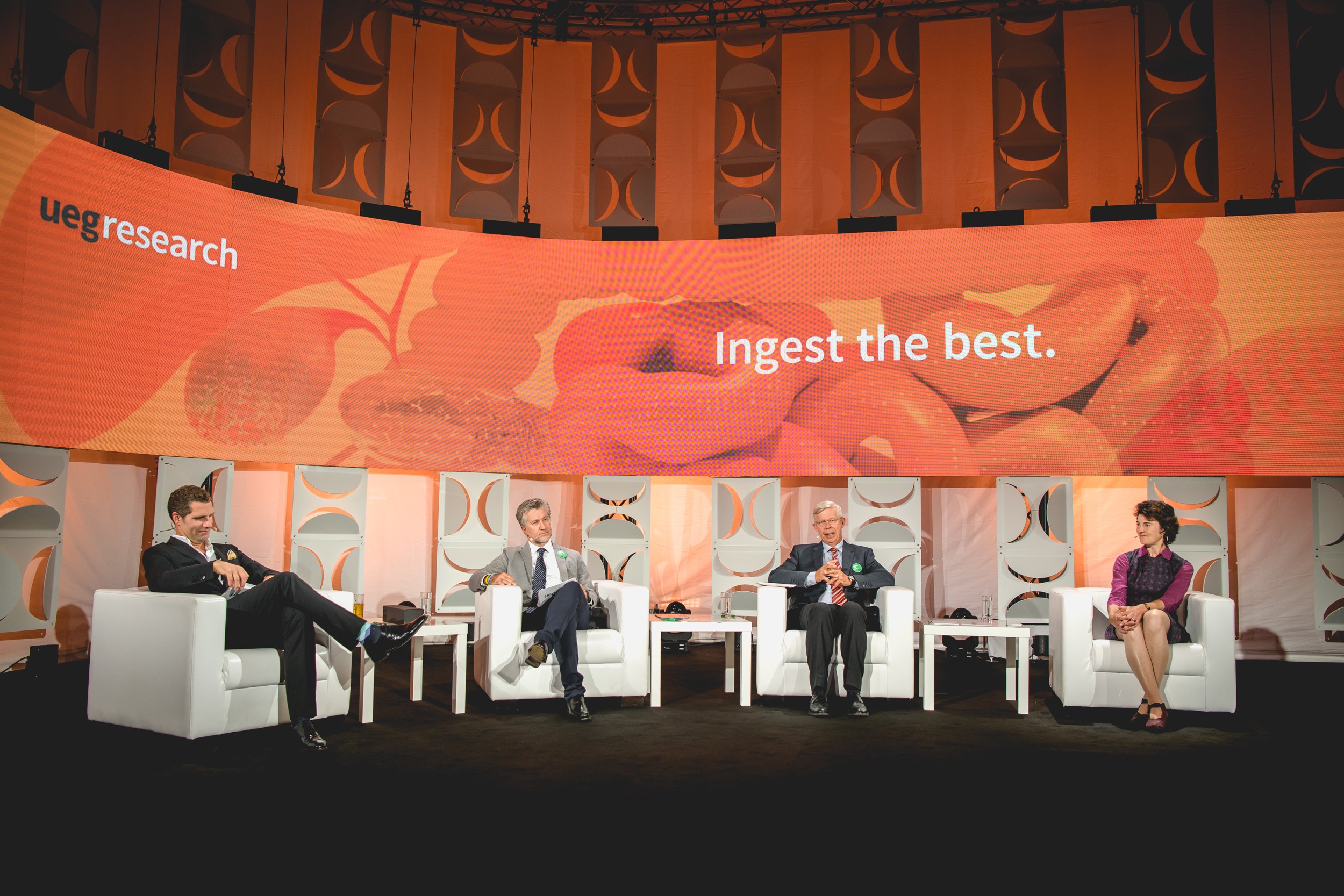 One of the final sessions of the day saw three presentations from prominent experts on the latest updates on our field from across the course of 2021. Laurent Peyrin-Biroulet kicked-off the session to discuss the evolution of new therapies in IBD. Summarising where we are today, Laurent Peyrin-Biroulet gave an update on IBD drugs, from where we are with recent clinical trials to the safety and efficacy in how they are performing for patients.

Thierry Conroy then provided an update on total neoadjuvant therapy in locally advanced rectal cancer. Debated and controversial issues within the field were addressed, looking at the pros and cons of neoadjuvant chemotherapy prior to total mesorectal excision (TME) resection, and Thierry Conroy also explored the latest clinical trials in how they impacted patient survival and quality of life.

The final talk of the session was delivered by Ulrike Walburga Denzer, who provided a thorough overview of the latest developments in endoscopy from 2021. The talk began focusing on the latest trials on artificial intelligence in endoscopy and investigated the latest published data and trials within the area.

The Best of UEG Week

The ‘Best of UEG Week’ session, the final session in the TV Studio and indeed of the congress, saw faculty members discuss their highlights from the congress.

Magnus Simrén, UEG Secretary General, opened with his highlights, which featured functional GI research on abdominal pain and gas-related symptoms, as well as a COVID-19-related study that highlighted the prevalence of gastrointestinal symptoms in COVID positive patients.

Julia Mayerle highlighted studies on the management of biliary pancreatitis and the differences between cholangitis and pancreatitis, whilst Jeanin E. van Hooft mentioned the live endoscopy sessions from Prague and AI in endoscopy.

The UEG Vice President, Helena Cortez-Pinto, pointed towards presentations on hepatitis C virus and cirrhosis within her congress highlights, as well as a study based on a non-invasive tool to diagnose Wilson’s disease.

Outside of the scientific programme, Axel Dignass discussed his journey as UEG President, highlighting the importance of friendship under the umbrella of digestive health. He mentioned the diversity in digestive health as a discipline and also the diversity within the UEG community. Axel thanked his Executive Committee colleagues, Hebert Tilg and the Scientific Committee, the technical staff, the industry partners, the moderator, the UEG office and everyone that tuned in throughout the congress for their support during UEG Week Virtual 2021!

An “unofficial handover” of key UEG positions took place at the end of the session, with Axel Dignass, Hebert Tilg and Magnus Simrén leaving their roles as President, Chair of the Scientific Committee and Secretary General, respectively. Their positions are to be filled by Helena Cortez-Pinto, Julia Mayerle and Jeanin E. van Hooft.

We'd like to take this opportunity to thank our fantastic faculty, speakers, partners, and delegates during UEG Week Virtual 2021! We hope everyone has thoroughly enjoyed the congress, from wherever they are in the world. Stay tuned for the UEG Week Congress Review, published next week, which will include programme highlights from across the meeting. 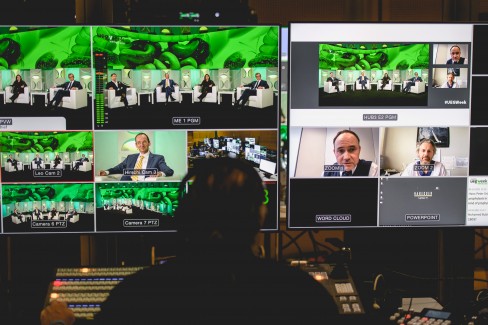 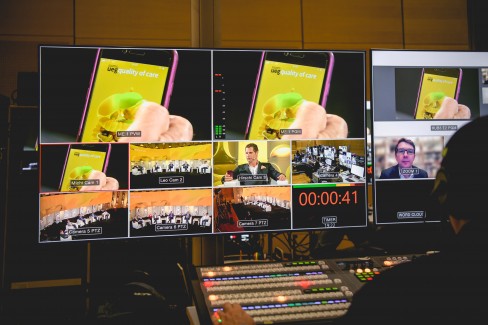 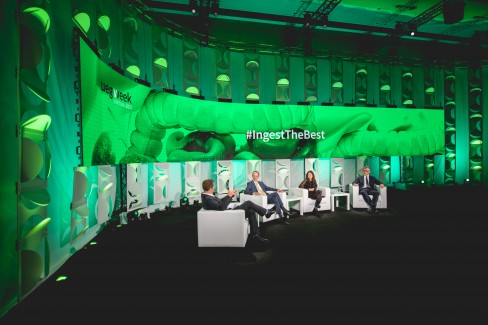 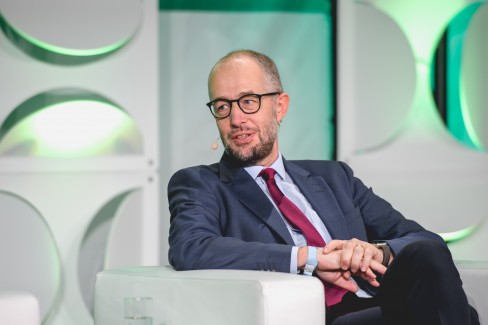 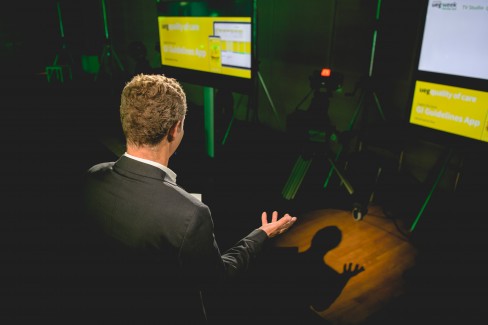 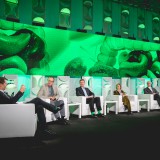 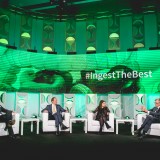 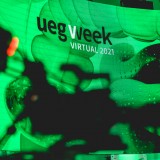